In December 2001, I answered the phone to the news that every wife fears. Bradley, my husband of three years, was in an accident. He was riding his motorcycle on a country road. His crotch rocket hit gravel and he went down at high-speed. Brad was in serious condition with a Traumatic Brain Injury or TBI, and he was being flown from our small town of “population 3000” to a big city hospital, an hour away. My stomach was in knots as a friend drove me to the hospital. 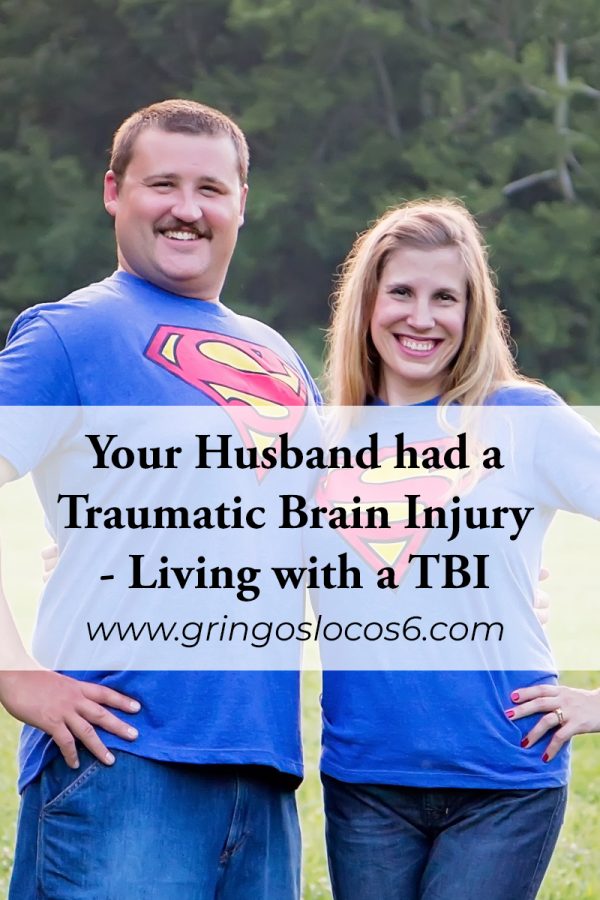 I was not allowed to see my husband when I arrived at the hospital because he was literally out of his mind. At the scene of the accident, Brad was having seizures and fighting the paramedics. They sedated him for the helicopter ride to the hospital. After being admitted he broke the restraints that held him to the hospital bed and was now wearing heavy-duty cuffs. All of this can be “normal” for a traumatic brain injury, even though the words normal and brain injury don’t belong together.

Bradley was wearing a motorcycle helmet and armored clothing. He did not break a single bone in his body but he rattled his brain around inside his skull, bruising and tearing sensitive tissue. Without his helmet, I have no doubts he would be dead or worse. Brad was heavily sedated for a few days and upon awakening, he was not the man he was before. He spent 28 days in the hospital and in-house rehab therapy for his injury. Thankfully he did not need surgery because the internal swelling went down on its own. On the downside, Brad could not talk, walk, or think properly.

A stroke is a kind of brain injury. Brad’s brain injury was brought about by outside forces, not a battle within like a stroke, but there are similarities. Stroke victims may have to learn to walk, talk, and think again. Brad had to relearn all of these simple things too. For him, much of it was still floating around inside his head but the pieces were not connected. Such as:

When we came home Brad was improving a little every day. He continued outpatient therapy for a month or so, but that is as long as our insurance would cover it. We drove an hour each way to therapy to make sure he was receiving the best care. On one trip I caused an accident with a dump truck. I was stressing and not paying attention. You can never prepare for someone you love and live with to have a TBI. A lady who lived down the street from us in Kentucky left her husband after he had a TBI at work. It was a sad situation. His injury was severe and he did not heal as well as Brad. He went to live with his parents even though they had kids together. I wish they could have stayed together.

How Does a Person Live with a Traumatic Brain Injury?

Never give up. People who don’t know my husband would never assume he had a TBI. Eventually, he went back to work. It’s crazy how the brain works but he did not forget how to do trim carpentry. That doesn’t mean it went smoothly. Brad’s father and brother were there for him, as well as his hardworking employees. His long-term memory was deeply impacted. As the years go by, he forgets more and more of our time together. Sometimes he will remember small details like flashes of light, and is happy for these. Brad knows people who remain close to him but if we lose track of individuals for long periods of time, he forgets about them. Brad is better at math after his TBI and is claustrophobic after his TBI. How is that for weird? I have known this guy since we were 11. I mean, we were close growing up. We have been best friends for 25 years. Brad is different after his Traumatic Brain Injury. A couple of our friends said he was sweeter. He has always had a sweet spot for me, so I don’t know on that one :-)

Brad worked hard for nine years after his TBI. Yes, nine years. There were so many things that happened behind the scenes, things I won’t share. I can tell you that this was not easy for anyone. Unfortunately with Brad’s brain injury, as time passed he developed more problems, or maybe he just couldn’t hide them anymore. During in-patient therapy, Brad’s psychologist said this could happen. TBI victims are prone to dementia and Alzheimer’s, as well. Brad was having complex partial seizures in his frontal lobe. This caused aggression, disruptive behavior, anger, swearing, and blackouts. The more stress he was under, the most seizures Brad experienced. After the particularly bad ones, he would be drained of energy, have headaches, and dizziness for a week at a time. We needed the help of family and friends to get through those times. We had to make changes, especially Brad. They included:

How Do I Live with Brad’s TBI?

The same thing, never give up. Sometimes I want to. Traumatic brain injuries are hard. This TBI was not our first rodeo in our time together. When we were dating Brad had a serious auto accident. He lost a lot of blood and almost an entire arm. Both of these accidents were very traumatic for him and his family. I am not going to lie. They sucked for me too. I have suffered from PTSD for many years due to these accidents and the aftereffects of the TBI. In the States, I had therapy, which helped me cope. Only since moving to Mexico have I been able to function without Clonazepam or therapy. My panic attacks are practically a thing of the past and the bad dreams are lessening as well. Life is going on and it’s not leaving me behind.

I love my husband and our beautiful children. I love Mexico and our new life here. I am very happy that Brad is realizing his limitations. He is a good husband and father. Things can always be worse. The TBI could have dealt us more damage and pain. What more can I ask for than what I have now?

How Should You View a Traumatic Brain Injury?

With care. Remember the following if you meet someone with a TBI or if someone you love has a TBI:

The reason I write this is because a TBI or Traumatic Brain Injury can be very hard to understand. For one thing, no two brains are alike and no two injuries are alike. The brain is the world’s coolest and most advanced supercomputer. It can not always be fixed and it does not always heal correctly. Many war veterans return to the US with a TBI. It is an injury everyone needs to be aware of. You can’t assume, “That person is drunk.” or “That person is mentally incompetent.” Many times a TBI will present itself like drunken behavior or mental illness. A doctor once told me that the TBI was a past injury. Perhaps but I live with its scars every day and I am only the wife. Do you know what my husband is going through? A little understanding can go a long way.

I can only hope that sharing part of our experience with Traumatic Brain Injury will help others dealing with this situation. Take what advice works for you and leave the rest :-) Signing off in Mexico, Tina