I poisoned our cats last week! Don’t worry, they are alive and well. But it was a scary ordeal! I thought I would tell you the story and answer the question, “How Much Does a Vet Cost in Mexico?” The story is first so if you want to skip it, scroll to the bottom for our vet cost in Mexico ;-) 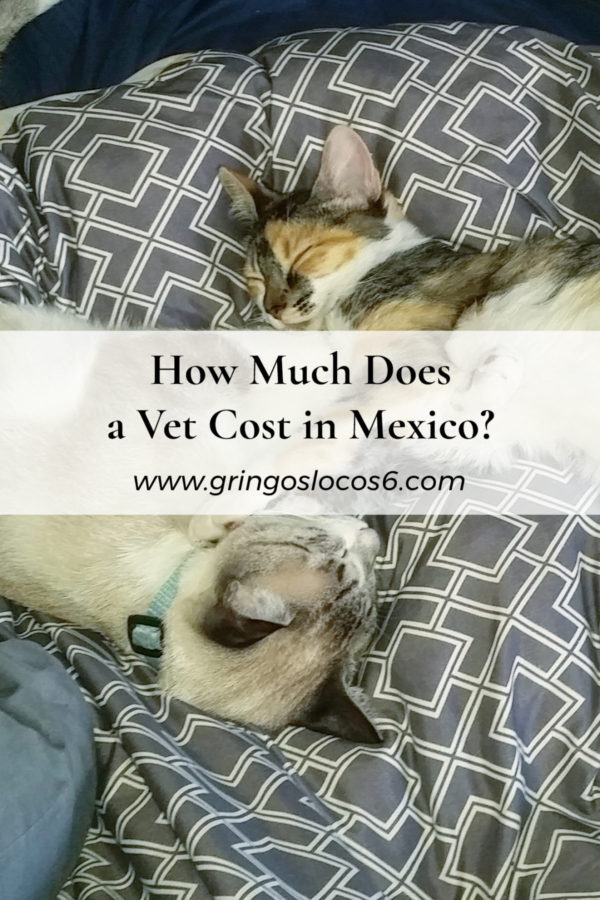 How Did You Poison Your Cats?!

Our cats have fleas. Or they had fleas. Last Friday, I gave them a bath, and then I put Frontline flea medicine on their backs. I used Frontline for small dogs. NEVER USE FLEA MEDICINE FOR DOGS ON CATS.

I should have known better. I bought the flea medicine here in Uruapan, either at a local vet or at the market. I can’t remember where I bought it, I only know that it wasn’t our vet and the person who sold it to me said I could cut the dose in half and use it on my cats.

THEY WERE WRONG. A few hours after I put the Frontline flea medicine on them, our cats started having tremors and seizures. The kitten, Yoda, had them worse because she is half the size of Starbucks, who is almost two. Yoda’s symptoms appeared first so we took them to the vet separately. I took Yoda and Brad took Starbucks an hour later when he started to get sick as well.

Our truck is in the repair shop, so I hailed a taxi. When I called the vet and told him we were on our way and it was an emergency, our taxi driver was so sweet. He heard me and he started driving faster and going around slow traffic so we could get our kitten to the vet.

What Did The Vet Do For Your Cats?

After we arrived at the vet, Yoda’s seizures got much worse. Our poor little kitten! I explained to the vet, Omar, what I did with the Frontline because I thought it could be the only reason behind this strange sudden illness. He told me, “NEVER GIVE DOG FLEA MEDICINE TO CATS.” Apparently, Frontline for cats and Frontline for dogs contains different ingredients for both species. Omar gave Yoda three shots, one for seizures, and then he put her on an IV to get the poison out of her body.

We left her there for the night, feeling sick to our stomachs with anxiety. About two hours later, Brad took Starbucks to the vet via another taxi. Omar gave Starbucks the same treatment as Yoda. We patiently waited for the vet to let us know how they were doing that evening. He sent me these two images at about 9:30 that night.

Omar told us that Starbucks was improving but that Yoda was the same. He gave her a 50/50 chance of surviving the night. I was in tears and told him I didn’t want her to suffer. He mentioned euthanization if she didn’t improve. I prayed it wouldn’t come to that. I think the vet was trying to prepare me for the worst. I would hate for her to suffer neurological damage like chronic seizures due to my stupidity but I also would hate to put her down! I didn’t think I could forgive myself for poisoning an animal!

We were just going to have to wait until the morning…

I am so happy to say that the next day, both cats were much better! The seizures and tremors had completely stopped. We picked them up from the vet and brought them home to finish recovering. They were sleepy and lazy the next few days while they continued to heal, but now they are once again our happy and healthy kitties! Yea!

This is Starbucks and Yoda today :-)

How Much Does a Vet Cost in Mexico?

Now after all this, you are wondering what was our vet cost in Mexico? 1700 pesos. As of today, 10/5/18, that is almost 90 USD. This price includes six shots, two IV’s, baths, and an overnight vet stay with care, for two cats. I can’t imagine what an emergency visit and overnight stay would have cost me in the US! I only know it wouldn’t have been under $100!

When I called the vet and announced I was on the way with Yoda, they were closed. In Mexico, most small businesses are closed from two to four for lunch and a siesta. Omar, the vet, opened the doors for me because it was an emergency.

I am so thankful for him and his wife, Eliz. They are both kind and honest! And their prices are always reasonable. We have taken all our animals there for sterilization and vaccination. You can find their Facebook page HERE to obtain more information.

I learned my lesson:

So this is the story. That was my bit of excitement for the week and it wore me out! Our pets are part of our family and we love them :-) We would have been devastated if they hadn’t survived. But they did. And all is well. Signing off in Mexico, Tina

11 thoughts on “How Much Does a Vet Cost in Mexico?”